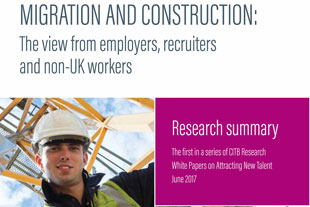 A major CITB (Construction Industry Training Board) report into migration and the construction industry has revealed that a third of firms employ migrant workers, saying they have comparable skills to British workers and are more readily available. Some employers (22%) also said they have a better work ethic. But only 1% of firms said they specifically look to recruit migrants.
1. Half of London construction firms heavily reliant on migrant workers
2. 2 in 5 employment agencies expect staff shortages due to Brexit
3. Migrant workers give flexibility but just 1% of firms specifically look to recruit them
4. Half of firms with migrant labour expect impact from potential migrant caps. Key concern is retaining existing migrant workforce
5.Breathing space as 75% of migrant workers expect to be in UK construction in a year’s time

The large-scale, GB-wide research, by CITB, IFF Research and the Institute of Employment Research at Warwick University, is the first to bring together the views of construction firms, employment agencies and migrant workers. Researchers conducted over 600 interviews to provide a detailed and up-to-date picture of the role migrant workers play in the construction industry.

Over a third of employers who employ staff from outside the UK say they do so because there are not enough skilled applicants from the UK, rather than for cheaper labour. The issue is magnified in London where one in two employers say they are ‘very dependent’ on migrant workers, compared to around one in six in Yorkshire and the Humber.

The study dispelled some common misconceptions around migrant pay, skills levels and occupations. It showed that only 1% of employers say that migrants are cheaper and that the majority of non-UK construction workers are skilled, with over two-thirds holding a construction-related qualification. Two-thirds of employment agencies reported that migrant workers have similar skills to their UK counterparts.

Professor Anne Green who carried out the research at Warwick University’s Institute of Employment Research, says:

“The UK construction sector relies on migrant labour alongside UK workers to meet demand. This is especially the case in London. Migrant labour plays a key role in offering flexibility for the sector to respond in a timely fashion to project requirements. This means that the future immigration policy matters, as does training of UK workers.”

The research also showed that while the largest number of migrant workers (22%) are general labourers (22%), there is a wide spread across many skilled areas such as architects (15%), carpenters/joiners (13%), plasterers (13%), bricklayers (11%), and directors/managers/supervisors (9%). A similar spread of occupations was reported by non-UK workers themselves.

The workforce is still mainly British, however, with only 1 in 8 construction workers born outside the UK. One in 15 or 140,000 overall come from the European Union (EU). The majority come from Poland (39%) and Romania (26%) and is largely London-based.

The research found that three-quarters of migrant workers surveyed expect to be working in the UK in 12 months’ time, with only 1 in 20 expecting to move abroad, and over half expecting to work in the UK until retirement.

Recruitment agencies reported that EU nationals are more commonly placed than non-EU migrant workers and two in five agencies are expecting staff shortages due to Brexit. One quarter of employers reported at least one impact of Brexit on their company to date, with the most common being increased costs (12%), followed by project delays due to uncertainty and a lack of client investment.

London-based construction firms were more likely to report impacts because of Brexit including a lack of client investment (23%), project delays (19%) and staff shortages (13%).

“Our detailed look at migration labour in construction illustrates how it gives employers the flexibility to respond rapidly to a range of skill needs. It shows that the construction workforce is still largely home-grown but migrant workers play a critical role, particularly in major projects and in London.

“While most firms are not reporting an impact from Brexit, those who employ migrants are concerned about the future availability of EU workers.  But with over three quarters of construction workers expecting to stay in the next 12 months, we have breathing space to adapt to any changes in migration policy.  While construction employers work with government on its future approach, we will support them to find new and better ways to attract, train and retain the workforce they need.