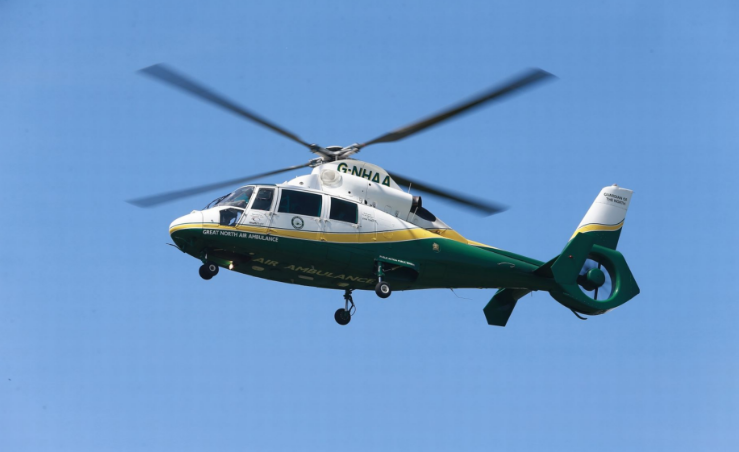 Workers on a construction site have spoken of their shock after a builder was hit by a JCB.

Eyewitnesses looked on in horror as the man was reportedly hit by a digger on the Riverside Village housing estate, in Hebburn.

David Cawkwell, who was working on the site at the time said: “The digger drove over someone – the throttle stuck and reversed straight over him.

“Everyone ran quickly over and then all the police and ambulance started to arrive.

“I don’t know the guy but I’ve seen him working here before.

“I’m just in shock – they reckon it’s touch and go with his injuries.”

Another builder said: “He’s in a critical way – apparently the accelerator got stuck and it went over him.”

They said: “I heard a really loud noise, like a helicopter, and thought, ‘that’s flying really low’. I looked out of the window and the Great North Air Ambulance had landed on the Riverside Field.

“I didn’t know what was happening so went outside and police cars and ambulances were speeding past with their lights on. By this time, a lot of the neighbours were outside as were the builders.

“People said a man had been knocked over by a JCB. Everyone here is in shock and just hope the poor man is going to be fine. We’ve been directing the emergency services around the estate because it’s easy to get lost as it’s still being built.

Jim Entwistle, spokesman for the Great North Air Ambulance Service said: “We were called shortly before 11.30am to a construction site in Hebburn.

“It was an industrial incident which left a male, in his early 40s, with serious chest and abdominal injuries. We worked alongside the North East Ambulance Service at the scene.