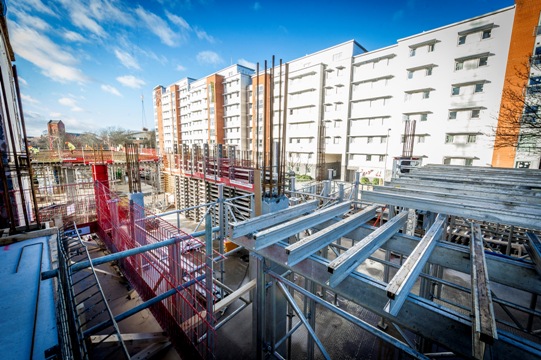 A construction worker was seriously injured when he fell down a lift shaft of a tower block under construction by  Balfour Beatty in the city center the indecent happened at 12.20pm on the site of the £42 million art, architecture and design faculty at De Montfort University Leicester.

The worker is believed to have sustained serious injuries to his limbs the men’s co workers helped carry medical equipment from the air ambulance which landed on campus 200 yards away from the indecent.

Leicester Mercury: ”The chap came past us on a stretcher and he was conscious. We couldn’t see his face because he had a neck brace on.

“Builders who come in said he had fallen three storeys down a lift shaft, but that he was talking afterwards.”

A Balfour Beatty spokesman commented: “There was an incident at our De Montfort University construction site this morning involving a subcontractor which resulted in an individual being taken to hospital.”