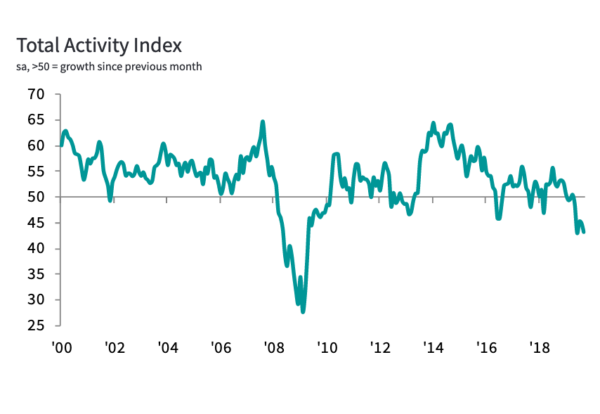 Buyers report a downturn in construction

Buyers report a “mired in a downturn” in the construction industry which is down a couple of points from last months reports.

IHS Markit/CIPS UK Construction Total Activity Index posted 43.3 in September – down from 45.0 recorded in August where anything below 50 represents contraction.

The drop in  the buyers report was the second-strongest since April 2009 and broad-based across all three categories of construction work.

Commercial activity was the worst-performing segment while civil engineering activity dropped at its sharpest rate for close to a decade while residential building recorded a fourth successive monthly fall.

Looking ahead, UK construction firms were mildly optimistic that output volumes would pick up over the coming 12 months although the level of business confidence was weak by historical standards.

Joe Hayes, Economist at IHS Markit, commented saying: “The UK construction sector remained mired in a downturn at the end of the third quarter, according to the latest PMI data.

“Activity is being pulled down at its second-fastest clip for over a decade as firms are buffeted by client hesitancy, heightened Brexit uncertainty and a weak outlook for the UK economy.

“The commercial sector was a notable casualty in September, with building activity here falling at the fastest rate since April 2009, highlighting the damaging effects of project delays and belt-tightening.

Duncan Brock, Group Director at the Chartered Institute of Procurement & Supply said :”The construction sector offered another devastating result in September with the second fastest fall in new orders since March 2009 and the financial crisis.

“After a relentless six-month decline in order books driven by Brexit uncertainty and political indecision, this is hardly surprising.

“Residential building continued to be hit hard with a fourth successive month of deterioration but the commercial sector took the biggest brunt of this downturn spiral as clients turned their back on spending and committing to larger projects.

“This in turn had significant knock-on effects on construction employment with the biggest fall in staffing levels since December 2010.

“Such disappointing news as the sector is still recovering from a lack of skills and capacity created by the last recession.

“Looking ahead the signs do not look positive.

“Even a moderation in input prices since March 2019 and some moderate improvement in supply chain pressures will not be enough to keep the wolf from the door as no-deal looms and businesses remain Brexit unsteady.”