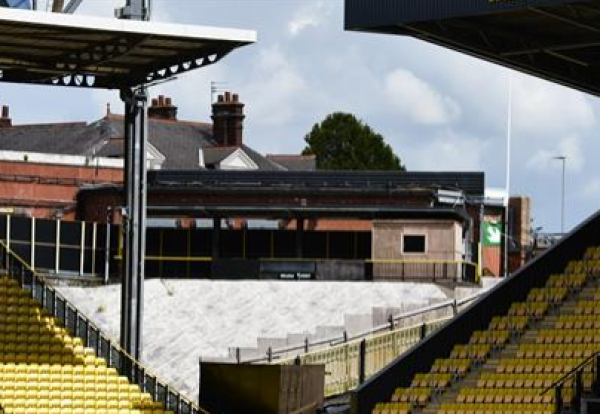 A worker has fallen 13 metres after the roof collapsed in a new section of Watford FC Vicarage Road stadium which is under refurbishment.

The emergency services have closed Vicarage Road while paramedics try to rescued the trapped victim who under rubble after the fall.

He has been taken to the Royal London Hospital by air ambulance.

The police said the man fell after the roof of the new facilities collapsed in the North East Corner of the stadium.

Police spokesman Natalie Dearman commented saying :”They were working on part of the roof, then that collapsed and the person fell.”

A fellow worker at the scene said some temporary scaffolding had collapsed. But the health and safety executive has now begun an investigation.

Cliff Webb, watch commander from Watford Fire Station, said: “We were called to a trapped person. He had fallen from height.

“He was in a difficult position to get to. We made sure it was safe for the paramedics and then we tried to get some spine boards through as quickly as possible.

“An air ambulance landed on the pitch and we carried him through the building works then on to the pitch.

“He’d fallen from a part of the new stand.

“He was conscious and breathing and had head and leg injuries and a possible pelvic fracture.”

Jake Ashby, spokesman for the East of England Ambulance Service, said: “We received a call to say someone had fallen from height.